The Drava originates on the northern face of the Cima Nove Dobbiaco mountain (2.642 m a.s.l.) at the southern edge of the Toblach Field, south-west of the town of San Candido. It runs past the town eastwards along the wide, glacially formed Puster Valley, and after a few kilometres it enters Austria and continues its course in the East Tyrol to the town of Lienz, where it joins with the first major tributary - Isel. From there on, it runs along a valley between the Kreuzeck mountains in the north and the Gaital Alps in the south, and enters a wider valley near Sachsenburg, where it is joined by the strong left-side tributary Möll under Grossglockner , and turns south-eastwards past Spittal.

Near Villach it enters the wide Klagenfurt Basin, runs through the city and is joined from the right side by the tributary Gail from the Gail Valley. From there on, it mostly runs eastwards close to the northern foothills of the Karawanks through Rosental over a series of run-of-the-river power plants and past Ferlach into the eastern part of the basin, the hilly Jauntal. From Völkermarkt onwards it winds along Janutal, and near the town of Lavamünd it is joined by the left tributary Lavant from the Lavant Valley and a little bit downstream, near the village of Vič , it enters Slovenia.

Near Dravograd, where the right tributary Meža joins the Drava, the river enters the picturesque Drava Valley between Kozjak in the north and Pohorje in the south. From both sides it receives water from numerous torrential streams. From Ruše onwards, it runs along a wider, densely populated valley all the way to Maribor. During the ice ages, it deposited under the city the extensive alluvial fan of the Drava Field, in which at the end of the last ice age it cut the current valley right at the foothills of the Slovenian Hills. In Ptuj it enters the equally gravelly and densely populated Ptuj Field, touches the hilly Haloze area, is joined from the right by the tributary Dravinja and just before Ormož it is joined from the left by the Pesnica. 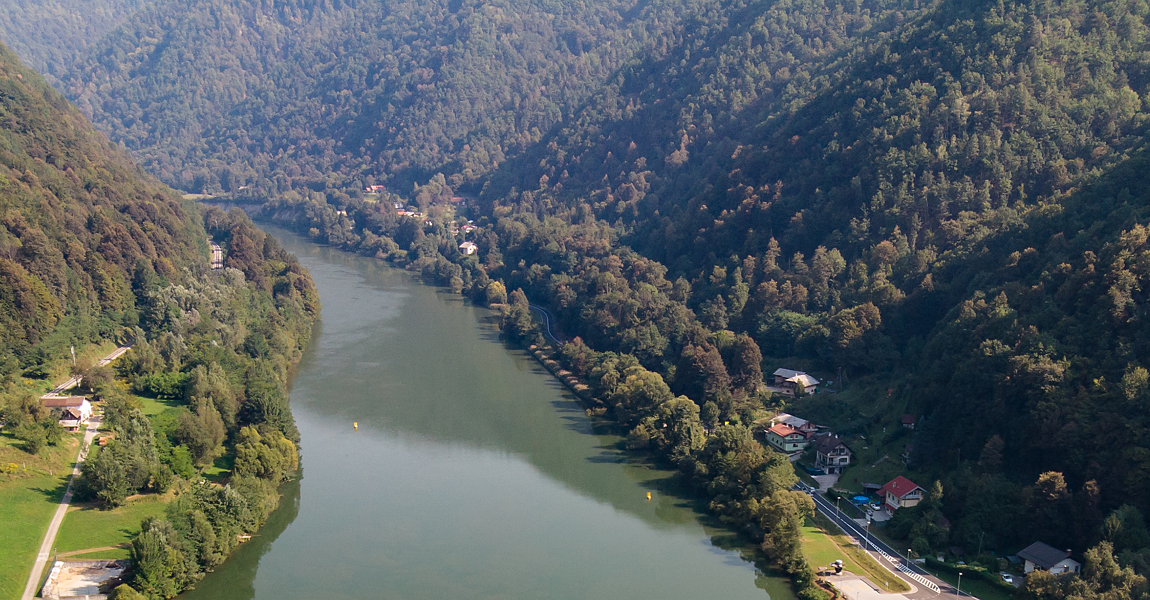 After Ormož, the Drava continues to flow for a while along the Slovenian-Croatian border, and then continues eastwards past Varaždin through the Croatian region of Međimurje. Near the town of Legrad, it reaches the Croatian-Hungarian border and runs along it all the way to Donji Miholjac, and then past Osijek to its confluence with the Danube. In that part, it is a true lowland river, as it makes its way in wide meanders along a wide and wet plain, intertwined with cut-offs, and it constantly shifts its course, which means that the national border runs along the current riverbed only to a small extent.

According to etymologists, the name of the river is of a pan-Slavic origin, having developed from the Indo-European word "dreu", which means to run, to hasten. In ancient sources, the river is called Dravus, and Drauva or Trauum in later sources. The older German forms of the river's name (Tra, Trau) and the current German name (Drau) originate from its Slovenian name.

The Drava is the most water-abundant river in Slovenia, as it has an extensive drainage basin and some of their tributaries receive water from glaciers in the High Tauern. In Austria and in its entire course in Slovenia, it has a rain-snow regime, which means that its highest discharge is in June, when the glaciers are melting, and when the consequences of the summer drought are already showing in a majority of other rivers. It reaches the other discharge peak in November, when it is filled with the autumn rains from the wide Alpine hinterland. The drainage basin of the Drava River in Italy and Austria encompasses 10,964 km2, and another 2,700 km2 in Slovenia. The part of the drainage basin in the central Alps defines the basic characteristics of the flows of the tributaries of the Drava River. Due to the strong Mediterranean climate influence, tributaries from the southern part of the drainage basin cause short high discharge rates in the spring, and in particular in the autumn; on average once in 100 years they may reach more than 2,800 m3/s, although the average annual discharge is only 297 m3/s. In November 2012, the discharge reached 3,100 m3/s. 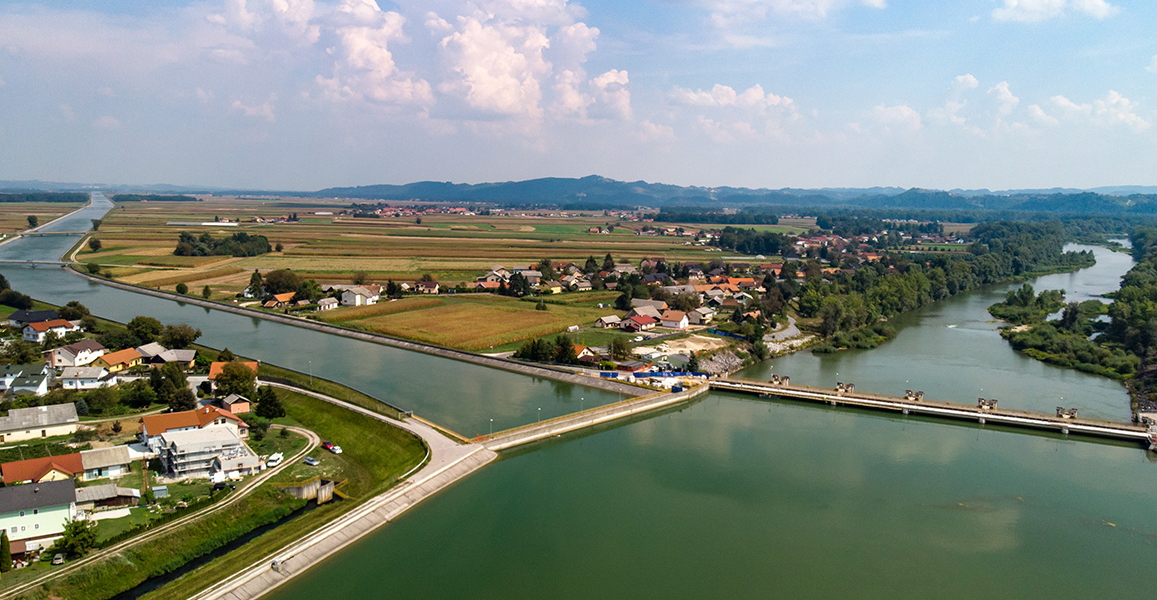 Due to the water abundance and considerable drop, a total of 21 hydro power plants have been constructed on the Drava; nine in Austria (Amlach, Paternion, Kellerberg, Villach, Rosegg – St. Jakob, Feistritz – Ludmannsdorf, Ferlach – Maria Rain, Annabrücke, Schwabegg, Lavamünd), eight in Slovenia (Dravograd, Vuzenica, Vuhred, Ožbalt, Fala, Mariborski otok, Zlatoličje, Formin) and three in Croatia (Varaždin, Čakovec, Dubrava). The oldest hydro power plant is Fala, which started operating in 1918 (and has operated continuously until today), while the youngest hydro power plants are Amlach, Paternion and Dubrava, which started operating in 1989.

People and the river

Construction of the chain of hydro power plants has changed the image and economy of theDrava Valley between Dravograd and Maribor. There were not many sawmills and mills on the Drava, as it was too large and too wild, therefore many of them were installed in the lower courses of the streams running into the Drava. Rafting on the Drava river was probably already developed in the 14th century, and it reached its peak in the 19th century, before the Drava railway was constructed, and it completely died out at the beginning of the Second World War. In addition to planks and other processed timber, also transported on the Drava were roof beams, window and door frames, vineyard stakes, wood shingles, lime etc., to Maribor, Ptuj and Varaždin and further down the Drava and Danube to Pančevo. In addition to rafts, also used for transportation of goods were custom-made boats, called šajkas, which transported timber, metal products, lime and other products downstream. The life of rafters on the Drava was described in the novel On the Rafts by the author Anton Ingolič.

The Drava used to be a gold-bearing river, bringing gold from the metamorphic rocks in the High Tauern. In certain areas in the Austrian Carinthia and Croatia, gold panning was rather extensive, and this activity was also pursued in Slovenia until 1940.

In its lower course, the Drava is navigable for small river ships from the town of Barcs downstream to its confluence with the Danube, but cargo transport on the river is modest. From Barcs to Osijek the river has the status of a Croatian-Hungarian inter-country waterway, and from Osijek downstream it is an international waterway. Tourist boats carry tourists in Villach, Völkermarkt, Maribor and on the Ptuj Lake. Popular among water sports enthusiasts is the upper course of the Drava from Lienz to Paternion. From the source of the Drava to Legrad in Croatia, running along the river is the international Drava Cycle Path.